I walked into Starbucks one morning, (and by morning, I mean 11am) and read the following sign posted on a corkboard above the cream and sugar:

Then I read another one:

That is the weekend. You know that part that comes at the end of the work week, when all you want to do is sleep in, chill and relax? Well, at least that’s what I want to do. I mean, just reading all those flyers made me tired.

Maybe it’s age, I don’t know, but after working a forty hour week the last thing I want to do is get up early on a Saturday. So unless you are a parent of small children, (nature’s little alarm clock), I don’t get it.

I had the privilege of sleeping in until 10am on a weekday recently and it was pure heaven.

I could hear birds chirping and lawn mowers going. Flowers looked brighter and the sky was bluer than ever. I felt awake and alive.

I’ve never been a morning person. In the first grade I was made to be a “late bird” in school, meaning I arrived later than my sister who was an “early bird”. I am not sure why they staggered our arrival times, but I like to partly blame my condition on the Martinez Unified School District.

After that, the late bird label just stuck. I just had such a hard time getting up in the morning. And Saturday morning cartoons? Forget about it.

In junior high and high school I always performed terribly in my first two periods of classes. One year I had math first period. I don’t have to tell you that I got a "D" in that class. "D" as in "Donahoe-Don't-Do-Dis!"

You would have thought I would have outgrown my allergy to mornings, but it stayed with me well into my twenties.

From ages 24 to 35, my work hours were sporadic as it was feast or famine in the entertainment industry. One day I would have to be on a movie set at 7am and then the next day I wouldn’t have to be at my desk job until 1pm. That’s how I survived those years.

I also loved going out dancing at clubs or going to concerts any night of the week. Getting home at 3am was no big deal. As long as I didn’t have to be up early the next morning.

I wasn’t always so lucky with that type of flexible work schedule. One time I worked on a movie set where I had to be there every morning at 6:30am for two months and that schedule just about killed me. You would think that my body would switch over and that if I went to bed early, I could get up early.

You would be wrong.

What would happen was, is that I would fall asleep at 8:30pm and then wake up at 2am and then toss and turn and then eventually get up and be miserable, arrive to set with my bloodshot eyes and work another 12 hour day. I just couldn’t catch up on my sleep. No matter how early I went to bed.

Morning air just feels different. Unless it’s the dead of summer, it’s cold and brisk and uninviting as if to say, “go back to bed you worthless human being, we don’t want your kind around here.”

And don’t get me started on how often I have slept through my alarm clock.

These days I work a nine to five job.  But more like a ten to six job, (God bless my boss who is also not a morning person).

There is a message in society that says that those of us who aren’t morning people are lazy. While that might be true of some people, I would say that is not true for most of us who experience nauseous, aka “morning sickness”, when we first wake up and we are not even pregnant.

That’s right, if I get up early in the morning, I sometimes feel literally sick to my stomach. I don’t feel rested.

Maybe it’s because I’m a creative person that I hate mornings? Most artist types I know don’t care for mornings either, they just tolerate it.

Recently, in the San Francisco Chronicle this quote was printed in Leah Garchik’s Public Eavesdropping column: 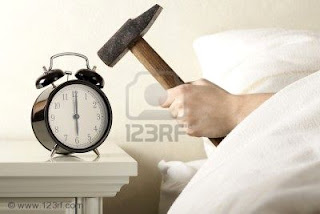