Where Were You This Week?

My mom, dad, grandma, sister and I all piled in my mom’s white van and rode the 10 minute drive to the marina.  The air conditioner went on and the suntan lotion came out.  Martinez may only be a half hour away from Oakland, but the Bay Area’s micro-climates will cost you.  Another reason why I moved out of the town I grew up in-  I could never handle the heat.  And neither could grandma.
Once at the marina, we carried out lawn chairs and umbrellas and begin to look for shade.   We found a tree to park all of our stuff under and weren’t seated five minutes when my father decided he wanted to get up and look at the vendors that were set up for the Barbeque Festival that was happening right across the way from where we were sitting.  No one seemed to want to go just yet, but it was Father’s Day, and like a fourth born who takes after her father probably more than anyone else in the family, I got up and walked with him.


It wasn’t long before my dad was schmoozing with a Martinez local about the Carnival Cruises he was selling.  My father with his blunt Archie-Bunker-like Irish temperament was going to tell this young, thirty something vendor all the things that were wrong with cruises.  My father should know, he has been on plenty of them (probably all  my mother's doing and if it wasn’t for my mother those two would never go anywhere).  My father would be content to just sit in his den in their three bedroom townhouse with the air conditioning blasting, sucking on his sugar free orange popsicles while watching some old movie.  And he had a belly to show for his inactive lifestyle.  So the fact that he actually wanted to get up and walk around and look at vendors I saw as a good thing.


As we continued to peruse the other vendors it was now my turn to chat it up with some women who were working behind a booth that was promoting the Martinez Youth Football program.  I let them know I first got my start in cheerleading through this program back in the 80’s.  It was such a fun time.  So when they told me they were having a hard time finding girls to try out because costs had gotten so expensive just to be a cheerleader, I bought a Martinez Youth Football tank top to support their cause.  And this was the town I had run away from so long ago.  Yet there I was, going back to my roots, trying to keep the cheer program alive.  Keep the change.


My dad and I finally finished walking the plank and headed back to our shaded area on the lawn across the way to join the rest of our family.  We sipped on overpriced tropical punch and ate corn dogs and curly fries.  I played games on my smart phone.  We chit chatted for a bit. Then finally when we were all finally bored and couldn't take the heat anymore we relented, packed up our stuff, and sought refuge in my parent’s air conditioned house for dessert. 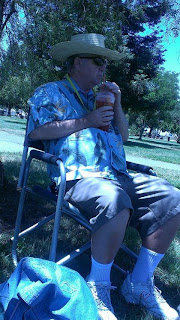 Posted by theresa at 4:58 PM No comments:

Just When You Thought It Was Safe To Go Back Into The Litterbox....


I did a solo piece back in April, along with five other women's solo peformances that sold out every weekend of our run, so now we have added two additional dates for next week!

I hadn't done theatre in 17 years so my stress level and adrenaline was up pretty high.  I am hoping the second time around I will not be so stressed out. Energy up, but not to the point of fatigue.

In the meantime, I dust off my script, pull the props out of my cat-bag and get back into character.  It will be interesting to see how I feel afterwards.  I would like to work up to a 60 minute show eventually (my current piece is only 11 minutes)  and I want to learn how to not fry myself mentally.

So, if you haven't already seen the show...come out next week if you can!

NOTE: I go on first, so if you plan on attending...don't be late! But again, one should nevah be late for the theatre! Nevah!!! Hope to see you guys there!


The show features female solo performances in honor of our quirky obsession with cats. This show, which was produced in association with the International Home Theater Festival, is All Terrain Theater's second showcase dedicated to promoting the work of female Bay Area theater artists.

This performance will be held at a private residence in Central Berkeley. Reserve your tickets for the address to our venue. Please note that there are cats and a dog on the property, though pets will not be present during the performances. The show is approximately 90 minutes and is wheelchair accessible.

THE METAMORPHOSIS - Written by Carol Lashof Performed by Heather Kellogg

IT'S NOT YOU, IT'S ME - Written by Rachel Bublitz Performed by Ramya Vijayan

Produced by All Terrain Theater and The Downward Dog in association with the International Home Theater Festival.

Posted by theresa at 4:35 PM No comments: