Well, I never thought a history class over the course of the Spring Semester, would become so consuming that it would zap me of my creative energy.  I turned in my final paper this past week as it was the last of three consuming projects taking up all the room in my brain.  That paper plus a team building project at work and a dance/rap performance at the Berkeley YMCA-  they all were due within a few days of eachother and this time last week, I thought I was going to spontaneously combust.  Yes, I know, compared to people with real problems, that sounds like nothing, but even good stress is still stress.

And now...I exhale.  I finally have time to catch up with a Memorial Three Day Weekend of Rest, that I have been so looking forward to.  While others head out of town or head to San Francisco to celebrate the 75th Anniversary of the Golden Gate Bridge and the Carnaval Parade in the Mission District, I chose to do not much of anything and I love it.  I chose to space out and stare at my messy apartment or gaze out my window.  I slept in til 10:30am this morning. It was glorious.

When Donna Summer died a couple of weeks ago, I was going to blog about that, but then another Bee Gee died and then I was going to blog about "The Week That Disco Died", and then I found out a good friend's mom died and I sort of hit a wall.  What is up with all this death?  2012 has already greeted us with too many R.I.P.s than I know what to do with.  Starting with my aunt's death in January, to Whitney Houston's death in February, then Ronnie Montrose's death in March, then another friend's parent's death in April, and then three deaths in May- I am SPENT. AND IT'S NOT EVEN HAPPENING TO ME.  I keep thinking I will write some deep blog once I have time to reflect, but I am not there yet.  Everyone quit dying, already.

Posted by theresa at 1:09 PM No comments:

Mom, You're Just Jealous, It's The Beastie Boys 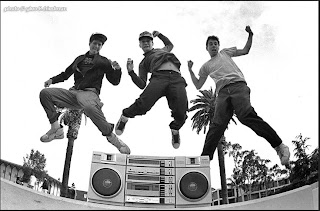 In the Fall of 1986, during my junior year in high school, I attended a Regional Lip Sincing Contest, where high schools from all around the East Bay competed for the coveted top prize: a trophy and a gift certificate to some local ice creamery.   That's right, the stakes were high and had Britney Spears been alive back then, she would have taken it all.

As corny as this event was, it was the first time I ever heard a Beastie Boys song.  Three young black guys from a rivaling high school got on the stage and started lip sincing to a song tilted, "Paul Revere".  I remember thinking three things: the beat was awesome, their dance moves were cool, and the Beastie Boys were black.  Their team ended up taking 2nd place.

Those kids from that other high school were ahead of all of us.  Pretty soon "Paul Revere" blew up at my own high school and was being rapped at a talent show during our homecoming week by two white guys in my class.  A mod girl (80's hipster) who sat in front of me in my English class also raved about the song.  The Beastie Boys started getting played at dances.  Everybody- black, white, hip hopper, punk rocker, liked this band.

After a string of hits from their debut album, "License To Ill", apparently the group hit a Sophmore slump.  I remember standing in line at Tower Records, the following year in 1987, waiting to purchase Madonna tickets for the "Who's That Girl" Tour, when the the record store employee announced, "I have 2nd row Beastie Boy tickets!"  and nobody in the Madonna line wanted them.  Were the Beastie Boys already over?

Not so, as their career quickly shot back.  I didn't keep track of their hits after high school, but I remember the group continuing to be popular.  I asked a drummer friend of mine in 1994 who was a fan, what he thought the reason was behind the Beastie Boys comeback success after their initial slump.  He casually replied, "they put out a good album."

Could it have really been that simple? You mean it actually is about the music?  In an era where hype, costume changes, and music videos dominated pop culture, could good music still be appreciated?

The Beastie Boys continued to be popular, and in 1998, when I was 27 years old, a 17 year old high school senior gushed about them one day after seeing them at a music festival.  "Both black and white people love them," she declared.  This band was still going strong.  And she, as well as her friends, knew all the "older" songs from their debut album - the one that was released back when I was in high school.

The Beastie Boys continued to headline concerts, release hits on popular radio, and stay relevant. With the exception of the band U2, I don't know many acts of my generation who have continued to garner this type of long lasting success.

A few years ago, as a joke, I started performing parody raps, after being inspired by Amy Poehler's "Sarah Palin rap" on Saturday Night Live.  I watched her performance over and over again and then did the rap myself at a company work party.   I started getting requests to do more raps and I even rewrote and performed the Beastie Boy's hit "She's Crafty",  for an announcement for a "Ladies Craft Night" at church.  That's right- The Beastie Boys during church.  You couldn't get rid of them.  Then I teamed up with my friend Peggy from my hip hop dance class and we became rappers "Tmoney and Pegeisha."  We performed at various friends' birthday parties and we still perform today.

In March of this year, during a friend's birthday outing at a Berkeley burger-joint-turned-karaoke-club, Peggy and I rapped "Paul Revere" in front of a small crowd as they ate their tater tots and sliders.  We picked the song because it was one of few songs that we both knew the words to.  Peggy is 14 years my junior.

MCA, I can't believe you left us so early. You made rap legitimate to a group of young white kids from the suburbs. Without you, we may have never listened.

I hope no bad people show up...

Posted by theresa at 2:31 PM No comments: