I have been M.I.A. from this blog, but only because life has been busy, and not out of laziness.

1. I started school last week. I am taking an American History class and my teacher said he will accept papers written in English, Spanish, French or Portugese.  Toto, we are not in Martinez anymore.

3. I went to Santa Cruz this past weekend, attended a wedding, went to the beach, and found a Sea Star: 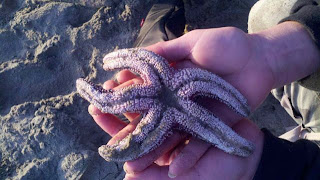 Pretty frickin cool. It totally caught me off guard.  After showing it to some kids, Tati and I released it back into the ocean because I am pretty sure it was still alive.

Tati in her natural habitat﻿ 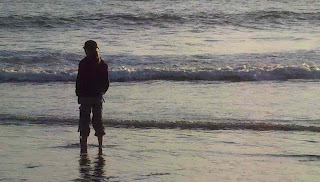 Okay, after writing all this out, I thought I was busier than this.  Why am I so tired? 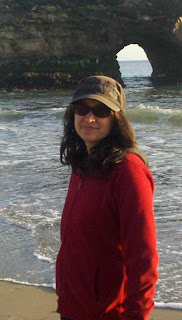 The Parable of the Lost Wallet

TWAS two nights before Christmas when my girl posse and I decided to venture out for some sushi and club-hopping in Oakland to blow off a little holiday steam.

After two hours of eating and conversation at Kan Sai Japanese restaurant in Oakland's Temescal District (aka the hipsterville)-  we headed downtown to the clubs.  We started at "The Layover", which was spinning the mellow jams. I am not a fan of the mellow jam, and one drink later, we decided to leave and walk over to our faithful go-to club, "Somar", which was just a few blocks away.

Somar did not disappoint, as the music of old school rapper "Too Short" blasted through their walls upon our arrival.  Once we flashed our ID's, Peggy and I quickly slithered to the back of the club, towards the dance floor.  We tucked our jackets and purses between the couches and the speakers by the DJ, and started dancing. The rest of the group soon joined us and at one point in the night, I used my ATM card to buy a drink, but then quickly went back out on the floor.

A couple of hours later, we were ready to leave, and decided to go back to The Layover once last time, since it was close to where we had parked our cars.  I went in briefly with everyone, and no one carded us the second time around.  After about five minutes, around 12:50pm, I decided to leave and said goodbye to everyone and headed back to the town of Albany, where I was cat sitting for a friend of mine through the holidays.

The next morning I woke up at 11am and discovered my wallet was missing.

It was Christmas Eve! I was supposed to do some last minute Christmas shopping!  I was thinking about cramming in a hip hop dance class as well!  I had plans sort of- and now, instead, I would be spending the rest of the day running around like a chicken with my head cut off trying to recover everything I left in my wallet on a day where most business were either closed or closed early.  I had to get crackin!

At first I assumed my wallet was stolen, I mean, I was in a club in downtown Oakland.  I did leave my purse in a pile of other purses covered in a pile of coats while I danced the night away.  I did grab my camera out of my purse a few times throughout the night to take pictures of our group:


Me and my girls at The Layover 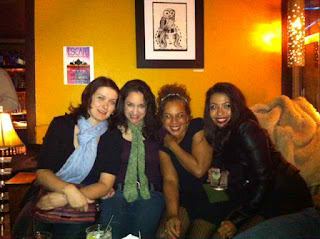 Yes, that's me holding my pink phone, my baby, my umbilical cord. 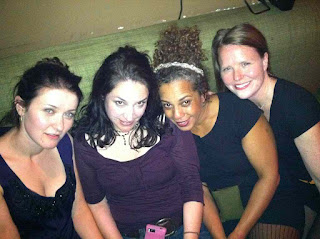 Whose the chick who brought her brother?? Alison! 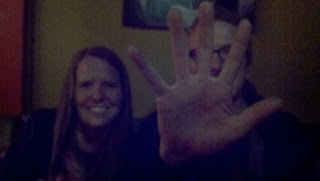 I figured between all the picture taking, my wallet must have fallen out of my purse.  But when I checked my online banking statement, there was no unusual activity on my ATM card.  There were also no extraneous charges on my gas card, which was the only other card in my wallet. I found that odd. If someone had taken it, wouldn't they have started charging my cards right away?  I started praying.

As relieved as I was that no one had started using my credit cards, I started to wonder if my wallet was just sitting on the dance floor still, waiting for another night of revelers to come in and steal it.  I couldn't take that chance.

I contacted both Somar and The Layover, and of course they were closed.  Somar didn't even have a phone number, but simply a "lost and found" email address, and they wouldn't re-open until December 27th.  I know most people would have thought that my wallet was as good as gone, but I couldn't help but think that my wallet was either sitting on the floor between the couches and the speakers, or someone had turned it in to the bartender.  I also had a slight chance of hope that someone would mail it to me.  Naive? Perhaps, but there continued to be no unusual activity on either one of my cards the following days after.

The only precaution I took was changing my ATM card the day my wallet went missing.  It was there, at the bank, adorned in my "morning after" sweatshirt, yoga pants, hair up in a pony tail with no make-up on my face, that I confessed my sins to a very understanding young banker named Darrell.

Me: I lost my wallet.  I need a new ATM card

Darrell: Where do you think you left it at?

Me: (putting my head down on his desk): I was at da club.

Darrell: You wuz at da club?

Darrell: That place is always packed!

I nodded solemnly. Darrell quickly canceled my old card and issued me a temporary one that would get me through the holidaze and I was on my way.

As each day passed without my wallet, I continued to check my gas card activity online to make sure there were no new charges.  I prayed that God would surround my wallet with His angels and that it would get into the right hands.

On December 27th, I heard back from the people at Somar via email and they told me they did not find my wallet anywhere.  It wasn't behind the bar or anywhere on the dance floor.  Same with the staff at The Layover, when they finally returned my call.  I knew it was a long shot.

Still hoping, that someone would mail it to me, I went by my Oakland apartment a couple of times to pick up my mail, and still, no wallet.

On December 28th, a friend who was coming to crash at my place during the holidays texted me that he was on his way.  I told him to let me know if I received any packages.  I still had hope.

On December 29th, my neighbor called me in the morning and reported:

"Hey, T, we found your wallet under your doormat!"

"Yes!" I declared excitedly and asked her to put it inside my apartment.

I rushed over to my place after work to find my wallet, with my credit cards in place and nothing taken.  Not only did this mystery person bring my wallet back to me, fully in tact, lacking nothing, but they hand delivered it.  They didn't mail it, they didn't even turn it into the bartender.  They brought it to my front door.

This got me thinking.

I could have had my prayer answered immediately and have found my wallet at the club, and it still would have been a miracle.  Or the wallet could have been mailed to me a couple of days after- even more so. But for it to show up 6 days later, hand delivered, touched me even more.

I am not a stranger to the miracle.  For the story about how I lost, but then found, my pink smart phone at a U2 concert, read this blog .

Sometimes God's timing is not ours.  In fact, it seldom is. Sometimes He delays answers to prayers for the sake of the bigger miracle.  Hey- maybe He will answer another prayer of mine by hand delivering me a husband right to my front door! Ha! Lord knows I have waited long enough....

I can see it now. I have visions of me jumping up every time the UPS man knocks on any doors in my apartment building and me chasing down his truck in the street, yelling, "Wait, did you knock?  Come back! You might be my husband!"

Hey, it's either that or the Jehovah Witnesses....

But seriously, to my guardian angel, if you are reading this, that means you googled my name off of my license -because this blog pops right up in an internet search.  Contact me.  I would love to know where you found my wallet.  But if not....

See you in heaven.