The Road to Bolinas

They say the road to Bolinas is paved with good intentions.  This is probably because you will need them in order to locate this quirky little town that's tucked away among the outskirts of Marin County where all the directional road signs have gone missing.

While in search of buried treasure, (and by treasure, I mean seashells), what started out as a last minute day trip that one fateful Sunday afternoon, became more of a real life treasure hunt.    I really would need a secret map if I was to ever find the elusive "Bolinas Lagoon" that was listed as #10 in the "Top 10 Places to Beachcomb in the Nation", according to some article I found online that dated back to 2007.

After a failed attempt at sea-shelling on the south side of Stinson Beach out "by the rocks" (where  I heard was also a good spot for finding shells),  I packed up my water bottle and flip flops orthopedic sandals and headed north on highway 1 to the town of Bolinas.

Well, the Yelp reviews online made it sound like Bolinas was part of Stinson Beach and I almost thought I could walk there from the south end, from all the reviews I read.  But something inside me told me that I needed to get into my car.

I drove out of the beach parking lot and onto highway 1 for a few minutes and saw no road signs to Bolinas, but only for the town of Olema, which I knew was too far.  I pulled over on the side of the road and punched in "Bolinas" on the GPS on my phone.  Thinking I had past it already, imagine my surprise when the automated voice told me to head north for three more miles.  "Three more miles," I thought, "why are there no signs?"  I got back on the road and a few miles later my GPS alerted me to turn left at a point in the road where no streets to turn left on were obvious.  I trusted my virtual compass and made the hair pin turn out onto the dirt road. I was informed by my virtual guide to "keep driving" and then I finally hit town.   The downtown of Bolinas, California.

I parked my car outside a small general store, got out, and began walking.  Why was this place so hard to find?  I had done my homework online, via Yelp, but even in the few reviews I read about Bolinas written by weary backpackers and international visitors, no one knew exactly how to get here.   Even the City of Bolinas official website gave vague directions on where to find them.  It was all very suspicious.  Why so secretive?  My mind began to wonder.  What were they hiding? Did they all become vampires at night?

Life Lessons from the Lagoon

I walked past a cute little restuarant called the Coast Cafe.  I knew I would be getting hungry soon, so when I first saw the CLOSED sign, my heart sank.  I got a little closer to it and realized they would re-open at 5pm for dinner.  I made a mental note.

As I walked along the main drag, the street began to curl to the right.  Locals walked in the middle of the road, some pushing baby strollers, some wearing beach towels wrapped around their waists.  Not alot of traffic in these parts.  I had passed some cute houses, when I noticed one of them had adorned their wooden fence with seashells.  "Wow", I thought.  "They are so trusting to leave really cool shells out in the open like that.  I would worry that someone would steal them."  This would reveal two things about me.  1) I live in Oakland where people steal stuff. 2) I had no idea the level of abundance of shells that I would soon partake in.

Shortly after, I arrived at the public access entrance of the beach and it was exactly how I pictured it would be.  Only a handful of people walked along the sand, with some young bohemian folks huddled in a spot playing instruments, while others walked their dogs.  I saw only a few surfers riding the waves. 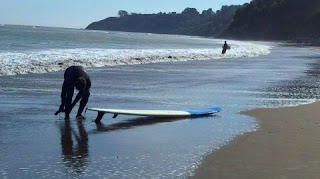 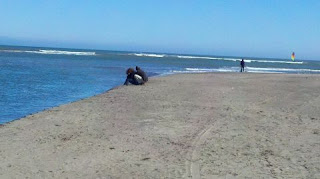 But what I really noticed when I looked down along the wet sand, were all the sea shells.  I got giddy. 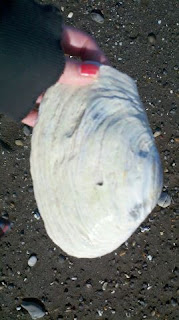 It was like manifest destiny as I began picking up shells immediately that had washed up on the shore.  I couldn't believe it.  Entire whole shells, just sitting there, all for the taking.  I realized I had left my plastic bag that I had brought for collecting, in my car.  I would have to put the shells in my purse.

At first I started putting shells in the side pockets of my purse. I was not anticipating finding so many. But soon, I just started dumping them directly into my purse.  I just didn't have enough room.  Shells that were white, brown, big and small and different shapes.  Some clam-like, some half-conch shaped.  Pretty soon I was being picky, not grabbing just any shells, like I used to at other beaches, but only the ones that I didn't already have.  It was there that I felt like God spoke to me.

I realized, as the shells grew in abundance, that I could be selective, and hold out for only the best shells.  I didn't have to settle for broken shells, or even cute rocks, like I had over at Stinson Beach.  I could pick whole shells only.  In fact, any broken shells I had collected earlier that day, I dumped back onto the beach.  It was life lessons from the Lagoon.  Hold out for the best.  Do not settle.  Your day of abundance is coming.

After combing the beach for about an hour, I was really hungry.  My purse was heavy and I needed to eat.  I followed the locals through a short cut back onto the main road and stopped off at a yard sale briefly. I may have been tired and hungry, but I am always a sucker for a yard sale.   From there I walked passed an old small Episcapalian chapel, and then landed at a antique/bookstore/hostel called "The Grand Hotel." 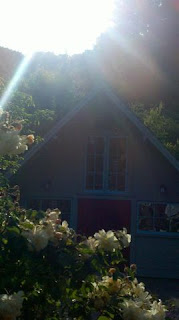 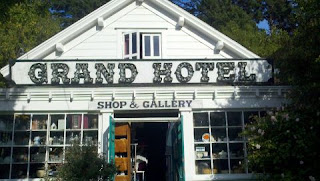 As I stopped inside the The Grand Hotel, the man running the place asked me where I was visiting from.  "Is it that obvious?"  I asked.  "I know everyone in this town," he boasted.  I wanted to ask him, "so are you all vampires?"  But I held my tongue.

I did ask him why there were no road signs leading to Bolinas and he simply said, "we tear them down."   Ah, I thought - must be a vampire thing.

I finally arrived back to my car and dumped all my seashells into my plastic bag to make room in my purse again.  I felt a little lighter as I entered the Coast Cafe for dinner.  I ordered the fish and chips, as I sat by a fire place inside, for it was beginning to getting chilly. 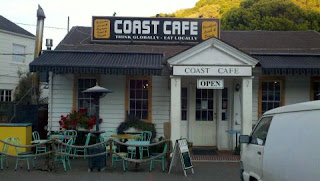 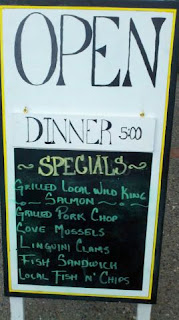 I felt completely serene as I looked around this place.  The locals might be a little wierd with their exclusivity and torn road signs tacked up on the cafe walls for display, but I was definitely coming back here.  Bolinas had become my new favorite spot. 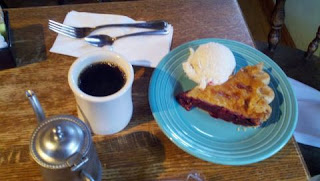 As I finished dessert - a berry pie and some coffee, I decided to snap a few more photos of the downtown and then get back on the road to the east bay before it got dark. It was going to take me about an hour just to get back to the freeway and I wanted to get home before the witching hour begun I turned back into a pumpkin. 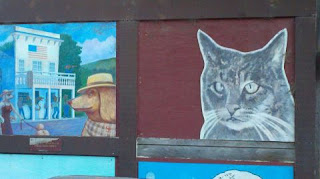 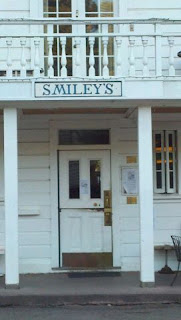 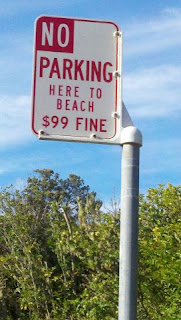 Turns out the long and winding road to Bolinas is paved with good intentions.  Well, it's either that or seashells.  Or vampires.


No, but really...It's the seashells. 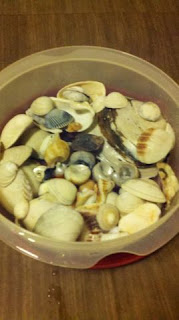 Email ThisBlogThis!Share to TwitterShare to FacebookShare to Pinterest
Labels: #Bolinas

One of the reasons why it's really hard to find Bolinas is that as soon as the State of California puts up a sign for it from the highway, someone usually steals it!!

CalTrans has put up countless numbers of signs because of this.

People also tear down or move street signs in Oakland to keep outsiders away.

What a wonderful day!

I love it! The abundance...the whimsical nature of your journey. It's got me thinking we might need to go too!
Pt Reyes has signs, still, I think, if you want to head up a little more north. That's our favorite beach day spot.